I just realised I never blogged about Milford 2014, hardly surprising, perhaps, with everything else that’s been going on, book-wise, but here goes – a retrospective.

(As you know, Bob,) Milford is the Milford SF Writers’ Conference, a peer-to-peer workshopping week, held annually in scenic North Wales. The website says it all, so go and take a look if you’re not familiar with the event.

Outdoor critiquing on a sunny afternoon in Snowdonia, 2014

This year there was not one Milford week, but two, courtesy of Worldcon landing in London in August. It’s always nice to be able to host overseas writers at Milford – and, indeed, even without Worldcon, we usually get  a few non-UK writers, or at least an American or two currently living in the UK. So this year, since Milford has been fully subscribed (15 writers) or even oversubscribed in the last few years, we decided to hold one Milford week in August and one in September. We figured the August week would allow overseas writers to do Worldcon and Milford on one plane ticket and the September week would cater for those writers who, after Worldcon, just wanted to lie down in a darkened room for a month before engaging in any writerly activity.

Unfortunately , because we set our dates early, we weren’t aware of a diary clash with Eurocon in Dublin. By the time we realised, it wasn’t possible to change our dates because the venue was fully b0oked, besides we had one author coming all the way from Australia who’d been adamant, when booking, that she could only manage the August week and couldn’t transfer to the September one.

Milford can take a maximum of fifteen participants otherwise the workload is enormous and, at the time we had to make the decision to continue with two separate weeks or collapse the event into one, we had twenty participants, ten for each week. Since Milfords in the past have run with as few as nine participants, we figured ten on each week was well worth running for. Unfortunately, we had two late drop outs from the August week, including our Australian writer who had, in the meantime, moved to Scotland without letting us know.

So we ended up with eight participants for August and ten for September. I was the only person attending both weeks.

Actually, after the super-heavy, fifteen-participant Milfords of the last few years, both weeks were not only constructive, but beautifully restful as well. The August group consisted of a bunch of Milford old-hands and though they hadn’t always attended the same Milfords, most participants had met each other before. Five out of the eight of us belong to the Northwrite SF Writers Group and meet up quarterly for Milfordesque critique sessions. 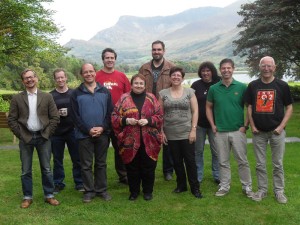 The September group had ten participants including three newcomers (Phil Suggars, James Maxwell and David Allan) which is always nice.

Stories were critiqued, friends were made, food was consumed, wine was drunk, tall tales were exchanged, places were visited, passive voice was outlawed, and suddenly Milford was over for another year. The next one is 12th – 19th September 2015. Places are booking now.

There’s a full writeup of both weeks here, by participants who are not part of the organising committee. We always ask a newbie to do the writeup, but since there were no newbies in August we asked Gus, who, although a Milford old-hand, had not been since it moved to North Wales.

I love Milford. My first experience of it was way back in 1998 when, as a terrified newbie I turned up to a windy clifftop hotel in Devon expecting to have to run the gauntlet of critiques from experienced (and maybe disdainful) writers, only to find unfailing kindness and a host of new friends. I can honestly say that without the information and contacts gained from Milford I would not have my book deal now. Some of those aspiring novelists I shared my first Milford with went on to get their first book deals well before I got mine (Alastair Reynolds, Liz Williams, Ben Jeapes), but I’m glad to say that I’m catching up.

Crazily, my first book to be published is Empire of Dust, the one I took to that first Milford in 1998 – much changed since then, of course (even the title) but still recognisably the same book. So my overnight success has only taken sixteen years. Such is (the writing) life.