Pelquin’s Comet: What’s It All About?

Please welcome Ian Whates as guest blogger, with a piece on his new space opera, Pelquin’s Comet – the first book of the Dark Angels. I can’t wait to read it. Ian says: 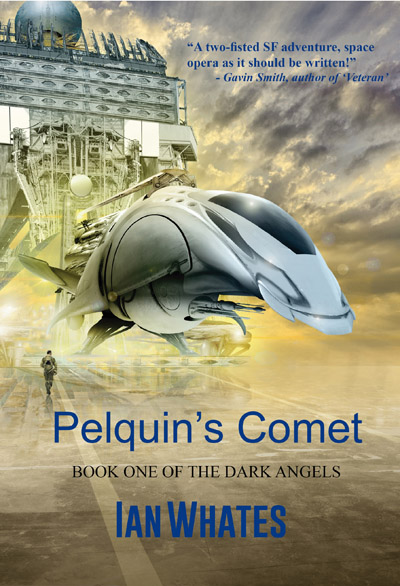 Huge thanks to Jacey for allowing me to hijack her blog and talk about my latest novel, Pelquin’s Comet. This is space opera. I’ve written space opera before but in the Dark Angels series (of which this the first volume) I wanted to do something very different from the two Noise books. I’ve always been fascinated by the concept of a disparate group of characters locked away for a protracted period, as in, say, a space ship. If the crew have been together for a while they would be used to each other, would have learnt to adapt to one another’s foibles, and a group dynamic would have evolved. What happens, though, if you introduce a stranger, someone who is forced upon them? The pattern would be disrupted, tensions would form, dramas develop… The book is set in an age of expansion, with humanity spreading out into the stars aided by caches of ancient alien technology which they don’t fully understand. Humanity has encountered its first extant alien culture, the Xters, and the two races eye each other warily across ragged and fairly arbitrary borders, not really competing for habitat due to physiological differences, but not trusting either. Intent on making their fortune, the crew of the Comet sets out to retrieve a newly discovered cache of Elder technology. To fund the expedition, the ship’s owner and captain, Pelquin, needs to take out a loan. One of the conditions of the loan is that Drake, an agent of the bank providing the funds, goes with them to safeguard the bank’s interest. Nor are they the only party seeking the cache. A sinister mining corporation is also after it and intent on thwarting any competition. In order to stay one step ahead of their rival, the Comet’s crew play fast and loose with the law, becoming fugitives in the process. That’s the set up, but the real drama centres on the banking agent, Drake, who has a dark and unsuspected past, one that he’s successfully put behind him; until this assignment, which seems destined to take him back into that past. It begins with a new crew member, Leesa, whom the Comet is forced to recruit when one of their own is severely injured. She is somebody Drake never expected to see again, and might just be the most dangerous person alive. In this book I’ve taken a number of familiar threads – the Comet itself reflects elements of the TV series Firefly, ancient alien technology boosting humanity towards the stars is an established trope perhaps most frequently associated with Frederik Pohl’s Gateway, the deadly traps set for anyone who breaches these caches are a nod towards Algis Budrys’ Rogue Moon, Drake’s strange symbiotic relationship with the alien Mudball is deliberate homage to Brian Stableford’s Hooded Swan books, and the man himself has shades of Sherlock Holmes about him… I’ve taken these threads, knitted them together with other elements of my own, and then given each of them a twist. The technology caches, for example, are not remotely what humanity assumes them to be, having a chilling and entirely alien purpose that humankind is oblivious to; Mudball has an agenda all his own and is using Drake to further his goals, while the banker has to balance his job against the need to protect his past, leading to compromises he would prefer not to make, and Leesa has worries of her own: she is an amnesiac desperate to reclaim her identity. All these elements play out during the course of the book, some reaching resolution, others merely hinting at such, to be explored further as the series progresses. At the heart of any novel, however, lie people, and I hope that in Drake, Pelquin, Leesa, Mudball (yes, even him), and the rest of the cast, I’ve created characters the reader will come to care about as the story unfolds and will want to stick with through future adventures. I had a lot of fun writing Pelquin’s Comet. The book enabled me to play with some favourite toys and do new and unexpected things with them. Big surprises and twists lie ahead as the series continues and the action ramps up, so for anyone who enjoys this first outing: buckle up, hold onto your seats, and let’s go for a ride. Ian Whates 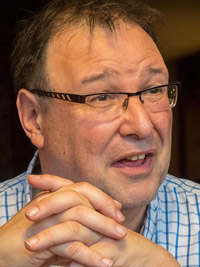 2 Responses to Pelquin’s Comet: What’s It All About?