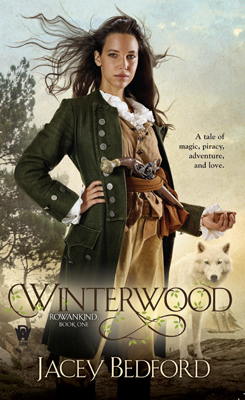 Yay! Tuesday 2nd February 2016 and my third novel, Winterwood, is published today by DAW in the USA and Canada. It’s available in the UK as an import from that well known company named after a South American river.

Winterwood – the first book of the Rowankind sequence – is a historical fantasy – quite a change from Empire of Dust and Crossways, which are both science fiction. But it’s a bigger change for readers than for me as a writer, because my work-timeline has involved working on one genre of book while editing another. For instance the writing order of my first three books was Empire, Winterwood and Crossways while the publication order reversed the last two.

I love working with complex characters put into difficult situations. Ross (Rossalinde) Tremayne in Winterwood likes her life on the high seas as a captain of her own privateering vessel, accompanied by a boatload of barely reformed pirates and the jealous ghost of her dead husband. When she’s drawn to Plymouth to visit her dying mother she inherits a half-brother she didn’t know about and a task she doen’t want. It’s all tied up with her family’s past – a past she knows nothing about until she starts to investigate. There’s a man, Walsingham, who seems to know more than she does and who will use any method at all, from blood magic to torture, to prevent her from completing her task, but she has an ally, a watch-wolf, sent by the Lady of the Forests. He’s smart, sexy and capable, and she really doesn’t like him – and neither does Will’s Ghost.

It’s set in 1800, in a Britain beset by French wars. Bonaparte is knocking at the door. Mad King George is on the throne and the industrial revolution is steaming ahead (literally). Many domestic tasks are undertaken by rowankind bondservants, a race of uncomplaining individuals so much a part of the British way of life that everyone seems to have forgotten how they came to be there. That’s about to change.

I had great fun writing is and as this goes on sale I’m hard at work writing the sequel, Silverwolf.

You can find out more at my web page here: www.jaceybedford.co.uk

2 Responses to Happy Book Day To Me: Winterwood Published Today