Winterwood has barely hit the shops, but  I’ve just seen the potential cover for Silverwolf, the sequel which I’ve been writing since last September. Everything works so far ahead in the publishing industry that you always feel as though you are leapfrogging from one project to the next (and back again). Larry Rostant is the cover artist for both Winterwood and Silverwolf. I’ve admired his work for some time, especially on books with a historical theme, so when DAW asked me who I might like to illustrate the cover I didn’t hesitate.  Winterwood needed a completely different feel from my first two books, Empire of Dust and Crossways, which are both space opera (and perfectly illustrated by Stephan Martiniere.)

Larry is a digital artist and photographer who uses real life models as the basis for his book illustrations. He does a photo shoot and then turns the resulting photos into digital art and places them in the right situation and background. The result is that you don’t get exaggerated characters in physically impossible positions. The characters look natural because they are.

Larry kindly gave me permission to show you the five potential covers for Winterwood. Any one of them would have been perfect, but I’m delighted with the one that was finally selected.

Here’s the first one, showing Ross Tremayne and the silver wolf with the Heart of Oak, a tops’l schooner, in the background.

And the second, which as you can see is the one DAW finally selected. It’s a very similar pose to the first but dressed and lit differently with the wolf image reversed.

The third visualisation is similar to the first with a lighter background.

Then for number four, Ross is focusing on the box in her hand. I like this, but it doesn’t feel quite as immediate as when she’s looking forward. Ross is a bold, direct character and this feels more introspective. 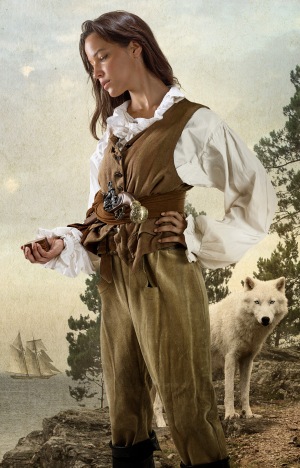 And the fifth and  final image is Ross facing away from the camera, possibly looking out to sea. 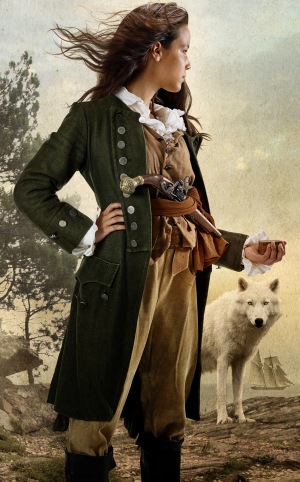 I’m delighted to say that I think it captures Ross, Corwen and the Heart of Oak perfectly.

My grateful thanks to Larry Rostant for his talent, and to Sheila Gilbert, my editor at DAW, for commissioning the artwork.