As I write this blog post I’m editing and polishing my third Psi-Tech book, Nimbus, the last in my trilogy of space operas (though there may be more ahead set in the same universe—it’s too early to tell, yet.) It’s due from DAW in October 2017.

The groundwork that I laid when writing Empire of Dust (DAW 2014) still dictates what I write three books later. Once the first book of a trilogy is published I can’t retrospectively change the big idea, or even any of the basic principles, so getting the world-building right (and consistent) in the beginning is really important. I there’s something to be revealed as the trilogy progresses then it needs to be foreshadowed in the first book. 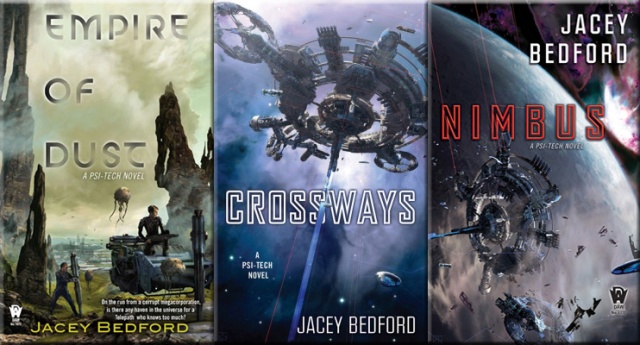 The Psi-Tech trilogy is set 500 years in the future. Building that universe is a task which crops up early in my writing/planning process, though maybe not right at the beginning. (I’ll be talking about world building in a future blog, so I’m going to skip some of that detail now.).

Which comes first, writing or planning? I’m a half-and-half writer—not quite a plotter, not quite a pantser (i.e. a discovery writer who writes by the seat of their pants to find out what happens next). When I first get an idea I’ll often sit down and write without a plan of any kind. Then, when I’ve done a bit of story exploration, I’ll outline the structure in broad detail. I have been known to have the beginning reasonably well detailed, the ending clearly stated, and between those two extremes I have a lot of wibble labelled: stuff happens, with maybe one or two pivotal scenes sketched more fully. I don’t tend to outline plot points chapter by chapter in great detail. (I’ve tried that and it makes me feel as though I’ve written the book once already when I come to write the first draft.)

Putting a specific character in a specific situation is probably what gives me the initial idea; someone with a dilemma I can get excited to write about. It’s an acorn from which I hope to grow an oak tree. In Empire of Dust, the opening scene features a lone telepath, in fear for her life. She’s been on the run for a year, and her pursuers are catching up with her. When I started, that was all I had. The surroundings that coalesced out of my imagination were bleak and grey, utilitarian, though a little shabby, and largely featureless, except where humans had tried to imprint their personality with improvised artwork on the doors of their one-room apartments. A space station, I thought, and the world building grew from there.

The character building also grew from there. Who was my telepath? What had she done to make herself into a target. Was it her fault? How was she going to get out of the initial dilemma? Ah right… she was going to hustle for a ride out of the space station with someone, a stranger. She didn’t know him, but as the author I needed to know who he was; what his background was; where he was heading for; what his own problems might be. These two characters had to be interesting enough to hold the attention for a full book, or, as it turned out, three books. They had to have room to grow, but their growth had to arise from their backstory. They didn’t appear out of nowhere. Cara was estranged from her mother. He father was dead. Ben’s parents were dead, but he had a grandmother, a brother and two nephews. We get to meet them in the first book, but they become important in the second book and continue to be a solid presence in the third.

A writer doesn’t simply need to know enough about setting and characters to deliver a single story, they must inhabit their world more fully and know the people who exist there. The book shouldn’t feel as though the universe it’s set in popped into existence just a few minutes before the first scene. It should feel as though there’s a history, even if you don’t describe it in great detail. When the book ends your reader needs to feel as though the universe is still carrying on beyond where you wrote ‘the end’ and left your protagonists living happily ever after (or not).

And what goes for a standalone novel goes three times as much for a trilogy.

I’ll be honest I didn’t plan that Empire of Dust would be the beginning of a trilogy. It could quite easily have been a stand-alone novel, though I did have some ideas of how it could progress into two, then three books. The reason for that is purely practical. When I wrote Empire, I did it purely on spec. If you are an unpublished writer seriously aiming at publication you shouldn’t waste time writing a sequel or a trilogy until Book One has sold, because if you can’t sell Book One, those sequels are dead in the water, and you’ve wasted precious time (years, even) when you could have been writing something that a publisher would buy. Been there, done that, got the T shirt. However, at the same time as writing your standalone, you have to spend a little time thinking about the possibility of continuation because, if you are lucky enough to sell a book, your new publisher may ask: ‘What else have you got?’ or, ‘Is there a book to follow this?’

My first three book deal from DAW was Winterwood (historical fantasy in the Rowankind series), Empire of Dust (space opera) and an unspecified sequel to Empire based on a one page story synopsis that they asked me for. That sequel became Crossways. My second deal was for the second Rowankind book, Silverwolf, and the third Psi-Tech book, which became Nimbus (Due October 2017.)

When planning a trilogy you need three separate books with beginnings, middles and ends, while the whole three books form an arc of their own, again with a beginning, middle, and end. You have to decide on the structure, and how the books are linked. Are you going to have the same characters continuing the story throughout the three books or each story going to be a linked standalone? Or maybe the first two books feature two different protagonists and those protags are going to come together in the final book.

If it’s one megastory told in three books, how are you going to deal with your (probably large) cast of characters? Unless you kill everyone on the last page, you need to decide which characters are going to survive the whole three books and which are going to be sacrificed to the god of plot. (You may literally kill them off or just remove them from the storyline in some manner when their role comes to an end.) Your long-lived characters, the ones who are front and centre throughout the three books, need to remain consistent from the first to the last page. That doesn’t mean your character can’t grow and change, but it means that you can’t suddenly have someone behave out of character unless you have foreshadowed it and inserted good reasons.

Your overarching three-book story may be obvious from the beginning, or it may grow out of events that are foreshadowed in the first book. Whatever you decide it has to be consistent and logical. What you decide to do in the first book is going to be with you for a long time.

In Empire of Dust I mention the visions that pilot-navigators have when transiting through foldspace. That foldspace theme develops in Crossways alongside dangerous problems caused by human antagonists. In Nimbus it becomes pivotal. The developments in foldspace will eventually mean that the human problems have to be solved in order to solve the foldspace problems. 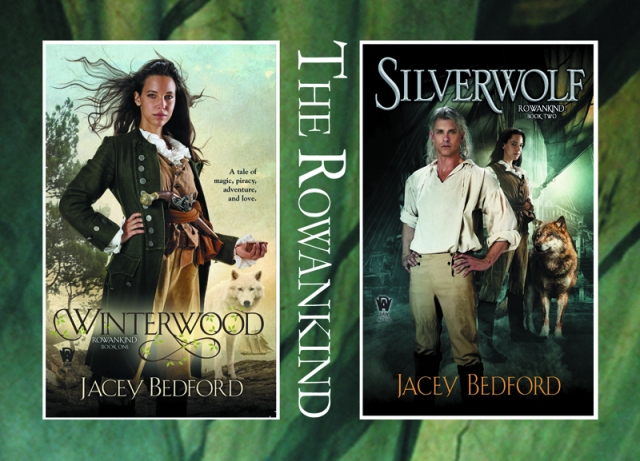 The Psi-Tech books form my first trilogy, but my historical fantasy series beginning with Winterwood and continuing with Silverwolf looks like growing into the Rowankind Trilogy, too. Maybe after that I’ll write a standalone. I already have ideas…