Worldbuilding for a Series

In the last blog I talked about Committing Trilogy, but glossed over the worldbuilding aspects so I could talk about them in this blog entry. I’m going to (mostly) talk about the worldbuilding involved in my futuristic SF trilogy, though at the moment I’m in the process of completing two trilogies. The Psi-Tech trilogy started with Empire of Dust, continued with Crossways and concludes with Nimbus, due out in October 2017. The Rowankind trilogy (historical fantasy) at the moment has two books published: Winterwood and Silverwolf. I hope that there will be a third, Rowankind. As yet there’s no date set for that, but I’m just beginning to pull ideas together for the first draft.

So let’s talk about worldbuilding in the Psi-Tech trilogy.

The big picture is (usually) easy. Broad brush strokes quickly conjure a canvas of space ships, colony worlds, interstellar trade, transport hubs and jump gate travel. Then I have to interrogate the setting to find out how it got to be that way. I need to know more about politics, history and economics. What happened to human history from the present day to the time of the story? A third world war? A cure for cancer? Climate change? Development of AIs. The Middle East aflame? Colonising Mars. Russia marching into Poland? Donald Trump dropping a nuke on North Korea. Catastrophic meteor strike? Eruption of the supervolcano under Yellowstone?

The setting is space, so many colonised worlds within our galaxy. There are no alien civilisations out there, at least, none that are known. Though our galaxy is a pretty big place and it may be that we simply haven’t bumped up against them yet.

Detail from Stephan Martiniere’s cover for Empire of Dust: a trikalla

In a story that contains multiple worlds I have to figure out what colour the skies are on each of them. Are there any strange creatures such as my trikallas (weird floating beasties on the planet Olyanda, lighter than air and with a taste for copper)? Is the basic topography of a place going to drive the way my human characters interact with the landscape. Are there earthquakes or volcanoes? What are the weather patterns? Is there potable water? How long are the days? Are there any wild seasonal swings? How many moons? How do the moons affect tides? Is native flora and fauna compatible with what humans require for subsistence? How will the planetary ecosystem react with imported flora and fauna? What natural resources are available?

And just as important: what steps might have to be taken to protect native wildlife and ecosystems from the invading humans?

In the Psi-Tech trilogy most of the colonies are controlled by one or another of the megacorporations which have become more powerful than any one planetary government, even that of Earth. Some colonies are well established, home to humans for three hundred years or more. Others are raw; their first generation settlers still struggling to come to terms with a new (and sometimes hostile) environment: fifty hour days; solar storms that render simple radio transmissions unreliable; incompatible botany and biology.

That’s all part of the broad canvas, but what about the detail?

My morning ritual is a small bone-china cup of milky coffee laced with honey and topped with a layer of double cream, plus a warm pain au chocolat. Healthy breakfast? Hey, I’m a writer. That is a healthy breakfast. It contains two of the five major food groups, coffee and chocolate. Three if you count the bread.

So when adding the detail into Empire of Dust I wondered what my main characters, Cara and Ben, would drink in the morning and what the logistics, politics and economics of providing their preferred beverage might be.

If there’s a trade in coffee the megacorporations will want their cut. They have grown powerful following on from what’s historically known as ‘The Great Colony Grab.’ (Earthlings take note: that’s what you get for not investing in national space programmes; the commercial boys take over and do it bigger and better.) Since pioneer Abelard Henning made the first successful foldspace jump between Earth and Mars using a pair of prototype jump gates in 2190, humans have spread across the galaxy. But there’s a technical problem that no one has yet been able to overcome. 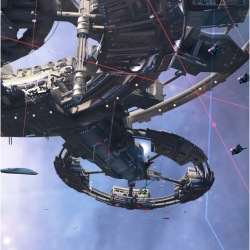 Platinum is required as a catalyst for jump gates. Unfortunately with each jump a small but significant amount is lost. Now, platinum isn’t particularly rare, of course. It’s found everywhere, but only in small quantities. It takes eight to ten tons of raw ore (and six months) to produce just one pure ounce of platinum. Even now in our pre-jump gate society, platinum is used in commercial applications in about 20% of all consumer goods, yet platinum-flow is tight. In fact, if platinum mining ceased today, we would have reserves of less than one year. All the platinum ever mined throughout history (so far) would fill a room of less than 25 cubic feet. Add jump gates and interstellar trade into that equation and the ceaseless quest for platinum is going to be brutal.

Platinum keeps the whole interconnected colony system functioning. If my guys want to drink coffee and eat chocolate on a space station, there’s a cost in platinum of getting it there, so it had better be worth it. The cheapest beverage to transport is made from dehydrated powder, vac-packed, and massively concentrated so that a pinch is enough to make a pot-full. Does it taste good? That depends on your viewpoint.

Cara Carlinni is an Earth girl even though she grew up being dragged around the galaxy by her parents, a marine biologist (Mum) and a hydro engineer (Dad). Her tastes run to real coffee when she can get it, but if she has to settle for Coffee Flavoured Beverage, she’ll make it nice and strong. Otherwise, if it’s all that’s available, basic, bland CFB will have to do.

Reska (Ben) Benjamin grew up in a farming community on Chenon drinking readily available (and cheap) CFB. He likes it. Real coffee tastes bitter to him, so he’ll sweeten it with whatever’s available and soften it with cream if he has to drink it at all. Yes, he knows most people consider it a luxury import, so if they serve up the real thing he’s going to be polite and choke it down, but really he’d rather have tea.

Where does coffee come from? Not from Earth, not any more. Some of the best coffee-growing regions were devastated when multiple meteorite strikes rearranged the geography of the planet in 2375. One huge meteor was shattered on its way inbound. Most of the fragments missed Earth. The ones that didn’t miss were (eventually) survivable. However there were several years of no summer leading to global devastation that would have knocked humankind back to the stone age without help from the colonies.

Earth produces enough coffee for her own use. Away from Earth, the best coffee now comes from a planet called Blue Mountain, in the Tegabo system. It was settled by a breakaway bunch from Drogan’s World, so it isn’t owned by, or affiliated with any of the megacorps. That means there’s an extra tax if the coffee producers want to distribute coffee via the regular trade routes. Fortunately for them there are some irregular trade routes courtesy of independent shippers. Smugglers? Who said anything about smugglers? Let’s call them free-traders.

Is all that in the book? Not really, except for Cara and Ben’s opposing taste in beverages and the pressing need for platinum. The thing is, dear reader, you don’t need to know all that to enjoy reading the book, but I need to know the background in order to write it. I need to know all of Earth’s history from the first successful moon base, engineered by the Chinese in 2051, to the Five Power Alliance which emerged as a global federal government in the reconstruction following the meteor strikes.

And what has happened to humans in five hundred years? Some have been genetically altered to be able to survive on marginal worlds, others have brain implants which enhance psionic abilities. And then there are those who haven’t had their genes tweaked, or artificial enhancements, who consider themselves pure. That in itself is a starting point for conflict. 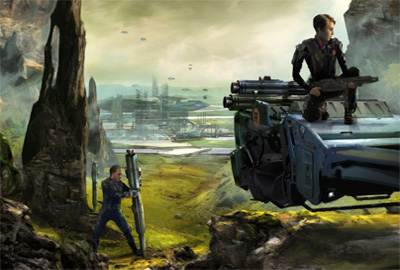 Writing future science fiction offers an unlimited number of possibilities and as the series develops, I’m able to explore more new worlds and new situations. But one of the major considerations is that whatever worldbuilding I put into the first book will still be there in the third. Maybe that’s a good thing. Or maybe something I dreamed up in book one will actually be a liability by the time I get to book three. Hence the need to plan ahead when worldbuilding. 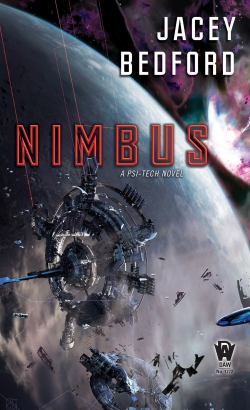 As I write this blog, I’ve just finished the first draft of Nimbus, the third psi-tech book. (Due in October 2017 from DAW.) Thankfully the worldbuilding from the first book is still holding up. What’s happened to my characters and my worldbuilding as the books have progressed? Cara and Ben started out working for one of the biggest of the megacorps, the Trust, but they have now left the Trust behind and gone rogue. More and more of the colonies are pressing for independence, and humans are discovering more about their universe. Something dark is moving in the depths of foldspace.

It’s all very exciting and I can tell you that by the end of Nimbus, the goalposts will have moved for humans in space.

Jacey Bedford maintains this blog. She is a writer of science fiction and fantasy (www.jaceybedford.co.uk), the secretary of Milford SF Writers (www.milfordSF.co.uk), a singer (www.artisan-harmony.com) and a music agent booking UK tours and concerts for folk performers (www.jacey-bedford.com).
View all posts by Jacey Bedford →
This entry was posted in fantasy, science fiction, writing and tagged crossways, empire of dust, jacey bedford, Nimbus, science fiction, space opera, worldbuilding. Bookmark the permalink.