I’m delighted to say that I’ve beaten my February 28th deadline and already delivered a draft of Rowankind to my publisher. OK, only 3 days ahead of schedule, but AHEAD is the important word here. Of course the book isn’t finished yet. My editor will have a long string of comments, and then I’ll have some fairly serious editing to do, but the whole process is chugging along nicely.

So now I’m allowed to forget about Rowankind for the next few weeks. In fact I want to forget about it, because when I start the edits I want the perspective of distance. I’m too close to it now to assess it properly. If I can give it a few weeks and come back to it fresh, I’ll be able to read it as if I were a reader, not its writer. That’s the plan, anyhow.

I’m on a writing retreat.

Yeah, I know. Shouldn’t I have taken a few days off? Well, yes and no. A few of us who met at Milford decided to come to the wilds of Welsh Wales, to Trigonos where Milford happens every September, to spend six days with a laptop and a stunning view in order to get some uninterrupted writing time. No day job, no phone ringing, no meals to make, no kids to see to… 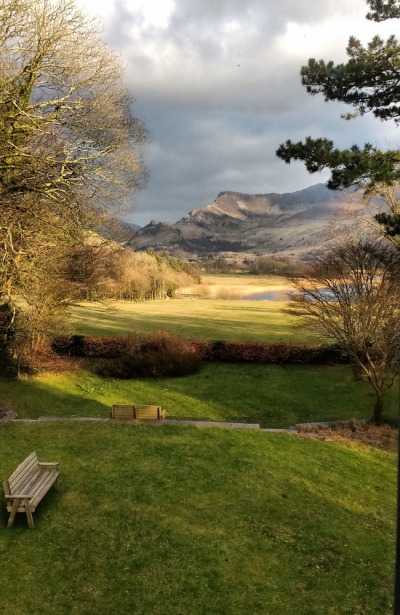 We arrived in glorious sunshine on Sunday. It was a blue sky drive and then the clouds began to roll in. This is the view from my bedroom window.  You can just see the edge of the lake (Llyn Nantlle) in the middle distance and the hill opposite is the Nantlle Ridge. I did a little furniture removal and shifted the writing table to the window,  of course… because why would you want to stare at a wall when you could be staring at this.

Am I actually getting any writing done? The short answer is yes. I’m working on the edits of a book that’s largely written, but still needs a bit of polishing. It’s a fantasy set in an analogue of the Baltic states around 1600-1650. I don’t have a contract for this one yet, but I’m working with my agent, Don Maass, to ’embiggen’ it before sending it out.

It’s a political/historical fantasy and though I’ve taken the Baltic as my base, I’ve messed with both the history and the geography. I suppose it’s an alternate Baltic. For a time the Polish Lithuanian Commonwealth was huge. I’ve taken a chunk of that and made it the kingdom of Livonia, encompassing present day Latvia, Lithuania and the northern part of Poland, and used it as a setting for a story of political intrigue spiced with magic. 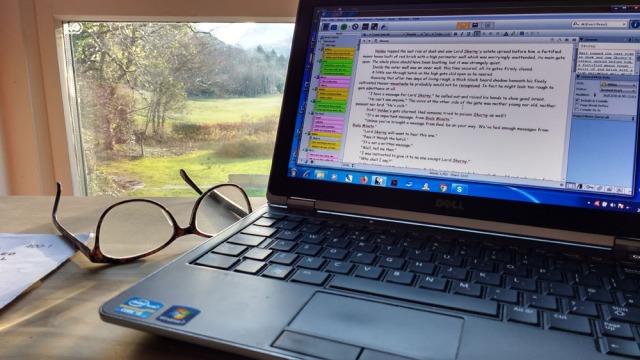 It’s told from three viewpoints, Valdas, the king’s failed bodyguard, Lind the (successful) assassin, and Mirza a witch of the Atsingani travelling people. They start off separately, but come together. We know who killed the king, but we don’t know who paid him to do it, or why. There’s an obvious culprit if you follow the money, but they need to look beyond the obvious.

Yesterday I stated writing in sunshine and today I woke to snow.

I have to say that Trigonos is lovely in all seasons. The snow is beautiful, especially since there’s no requirement to actually trudge out in it. except for pleasure.

Compare and contrast the first picture  with the last. Chilly but gorgeous. Hopefully they’ll have cleared the roads by the time I have to travel back on Saturday. Looking at the news, it’s nowhere as bad here as in Kent.

So I guess we just hunker down and get on with the wordsmithing for the next four days.