SF Conventions and How to Survive Them

I have just returned from FantasyCon in Chester. Run by the British Fantasy Society, this is an annual event and is the most writerly of British SF conventions. The panels are generally writing oriented and the dealers’ room is mostly full of independent small presses. It’s a weekend con, with events starting on Friday afternoon and continuing to Sunday early afternoon, with the awards dinner beginning at lunchtime and the awards happening through Sunday afternoon. To be honest, since I don’t have a horse in the awards race, and since I like to get home reasonably promptly, I usually leave mid-afternoon.

I arrived on Thursday because I wanted to see something of Chester, a city that I’ve always managed to miss visiting in the past. So this time I got to see the Roman amphitheatre and the Rows, with their two-level medieval shops. The venue was the Chester Queen Hotel, right opposite the station. It’s an excellent venue for a convention. The rooms are good and the convention facilities excellent. Added to that the staff were all extremely friendly and helpful.

My first ever convention was 2007, so I’m relatively new to fandom. I started attending cons regularly, and volunteering for panels from 2012. My first ever panel was the history/fantasy panel at the Heathrow (London) Eastercon with George RR Martin. I’m not saying I wasn’t overawed, but George is an old hand at conventions and he’s a lovely man who doesn’t make you feel like a raw newbie (even if you are). At that point I’d got my first three book deal with DAW, but my first book hadn’t yet been published.

Now I have five books published and my sixth is coming out in December. In the intervening years I’ve done a lot more panels.

Eastercons are lovely and I tend to treat them as social occasions, catching up with writer-friends I haven’t seen (probably) since last Eastercon. Fantasycons, however, are all about the business. Yes, we make it social, but the panels are practical and interesting. This year I went to one about blogging for writers, a panel about the publishing industry, a workshop on plot pacing, and several more. I sat on panels about writers’ groups and about plot generating. The latter was a strictly fun panel – the last one of the convention – where a panel of writers had to take random plot bunnies shouted out by the audience and make them into… well I’m not quite sure what we made them into, but there was a lot of laughter, especially when we ended up with a (fictional) sentient dildo in a murder-mystery scenario. 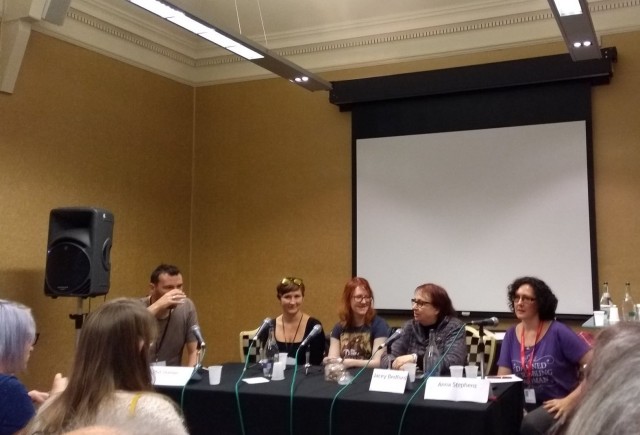 The plot panel on Sunday afternoon.

There were writer-friends there, of course, many of them who had some connection with Milford, so we ate together and drank together (mostly coffee to be honest), and managed some social time as well as panel time. I’d taken a stand for Milford, which I set up in the Dealers’ Room with leaflets and a pull-up stand, but since I wasn’t selling anything I didn’t need to be there with it all the time.

If it hadn’t been for The Train Line selling me tickets for a train that didn’t exist on the way home, causing me to spend an hour on the freezing cold platform of Newton Le Willows station while trying to get back on track for my journey, it would have been perfect.

Next weekend I’m going all the way down to Bristol (by train again) for the one-day Bristolcon, held at the Double Tree by Hilton in Bristol city centre. I’ve been several times before. It’s a small convention with an excellent atmosphere and – yes – there are quite a few writer-friends in attendance, mostly a different bunch than the ones who were at Fantasycon.

Though it’s a one-day con, because my train journey is close to four hours, I have to go down on the Friday and return on the Sunday, so for me it’s still a weekend convention. It will mostly be a social convention for me, but I am signed up to do one panel:
Saturday 27th October, 3.00 How to Become a Published Author
With Jasper Fforde, Anna Stephens, Jacey Bedford, Simon Kewin, Cavan Scott (M)
Blurb: It’s not easy. But with a manuscript under your belt you’ve done the hard part. Our panel of professionals from the writing and publishing worlds will offer hints and tips based on their own experiences and careers to date.

I’m looking forward to it.

Surviving two consecutive conventions might be tricky. I’ll need to catch up on sleep this week. I room-shared with Tina A at Chester and I’m room-sharing with Terry J at Bristolcon. Because we don’t see each other all that often we do tend to talk well into the night, and then, of course, have to get up for hotel breakfast the following morning. Being from Yorkshire, if I’ve paid for it, I’m going to eat it, so come hell or high water I will not miss breakfast! (Though I often skip lunch.)

So advice on surviving conventions:

12 Responses to SF Conventions and How to Survive Them