Though I have a large collection of paper books, some of them from my childhood, I mostly read fiction on Kindle these days. It’s not that I prefer electronic to dead tree books, but books are books and it’s the content that matters to me, not the form. Yes, who doesn’t love a first edition in a gorgeously crafted leather binding, but when it comes to practicalities, I can read my Kindle Paperwhite in the dark, I can make the print bigger when my eyes get tired, and I can carry around 676 (current count) books in my handbag, just like Hermione. And that’s only my current Kindle. I still have (probably) twice as many on my ancient Kindle Keyboard.

I devour books, I always have. There’s never a time when I don’t have a novel on the go. Sometimes (especially if I’m busy writing) my reading slows down, but it never stops. When I first started writing in earnest, I never used to be able to read fiction while I was incubating a book. Then I reached the stage where I could read fiction as long as it was a different genre; fantasy or historical while I was writing science fiction, and science fiction while I was writing historical fantasy.

And, yes, the short answer is that I mostly read genre fiction: science fiction, fantasy, and historical fiction, with a very small smattering of general fiction.

Now I’ve achieved equilibrium. I can read while I’m deeply engrossed in writing, which is good because a writer should keep reading what’s out there. It wouldn’t do to reinvent the wheel, or to write something with a theme too close to something that’s trending. Yes, I know Twilight, and possibly the True Blood/Sookie Stackhouse series, encouraged a proliferation of vampire novels, and Hunger Games heralded the arrival of the dystopian teen tale. While we’re at it, I’m sad to see so many heroine-pulled-back-in-time-to-meet-handsome-Scottish-laird books since Outlander became so popular. Some are well-written, of course, and enjoyable to read, but finding a new take on a popular theme is bloody difficult.

In the meantime write what sets your heart on fire now.

I’m currently halfway through the second of Sebastien de Castell’s Greatcoat books. There are so many books and so little time that I rarely read a whole series consecutively, but I so loved Traitor’s Blade that I went on to read Knight’s Shadow immediately and I bought books three and four (Saint’s Blood and Tyrant’s Throne) and downloaded them to kindle, ready. [*Edit: I’ve finished all four now, and love them all equally.]

What do I like about them? They are violent. Some have called them ‘Grimdark’ but I’m not so sure I would pigeonhole them quite like that, even though they have a high body-count. King of Grimdark, Joe Abercrombie’s First Law trilogy, is much darker, though, like the Greatcoats books it has a delicious streak of black humour. I don’t think I’m meant to like the unlikeable characters in First Law, though I find I do sympathise with both Glokta (the torturer) and Logen Ninefingers (the berserker). However, I really like the characters in the Greatcoats books. Falcio val Mond, once the First Cantor of the Greatcoats, has spent the last five years trying to live the dream of his dead king. Greatcoats were created to be the travelling magistrates, trained in the law and the arts of fighting, but the king was assassinated by power-hungry dukes and the Greatcoats disbanded and discredited. Falcio, however is still a Greatcoat in his heart and mind. Accompanied by his two best friends, Greatcoats Brasti and Kest he’s still following the king’s last order. Needless to say, it gets him into trouble more times than I can count. Falcio is easy to like. Brasti is a handsome womaniser, a bit thick, but a phenomenal archer, Kest is measured and thoughtful, the best swordsman in the country, and Falcio is supposed to be the brains of the trio. He’s loyal, brave, and tries to be honourable and fair. He doesn’t always get it right, but oh how he tries. Once he’s committed to something, he won’t give up, no matter how the odds are stacked against him. The trio’s dry and irreverent sense of humour leads to great banter and witty/sarcastic asides that lighten the mood. The trio understand each other, almost too well. At one point one of them remarks something like: ‘We should be married. We’ll be finishing off each other’s sentences next.’ Indeed there’s a great three-way bromance going on, though no one would want to admit it. I’m only halfway through the second book and already the author has done terrible things to his characters and put them into impossible situations. I’m looking forward to reading about more impossible situations. When Game of Thrones has finished, HBO could do a lot worse than look at the Greatcoats. 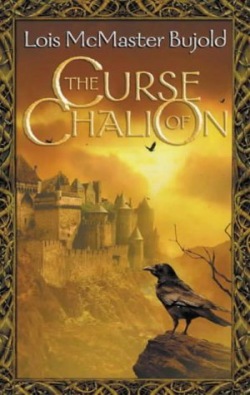 I like great characters in impossible situations. I like to like the characters I read about, or at least find some empathy for them, and know why they do what they do. Maybe I even like to fall in love (a little) with them. How can anyone not fall in love with Cazaril from Lois McMaster Bujold’s excellent The Curse of Chalion? Caz is resilient, steadfast and clever. He’s a broken man when the book opens, and as he rebuilds himself, he rebuilds the lives of the people around him. Sacrificing himself, if it’s the only way. And the wonderful thing about him is that he doesn’t think he’s anyone special. He simply does what he knows he has to do, even when it scares him spitless. (And now I’ve made myself want to go and re-read Curse of Chalion again – for about the sixth time.)

I blog all the books I read and the movies I see here on my Dreamwidth blog. I’m not a professional academic reviewer. I blog to remind myself of what I’ve read and why I liked it (or didn’t). There’s a decade of my reading on there, mostly spoiler free. Go take a look.

If you like a book, or even if you don’t, blog about it, tweet about it, stick it on Facebook, or Instagram, or whatever the latest social media platform is. Your thoughts are the oxygen by which books (and therefore authors) breathe.

1 Response to What I Like to Read, and Why