Science For Fiction is an annual event organised by Dr. David Clements at Imperial College, London. It’s a series of lectures by scientists at the cutting edge of their field, specifically aimed at writers. (Unsurprisingly a load of Science Fiction writers attend, most of whom I know from attending Milford.) The location is perfect. Imperial College is just a short walk from the Science Museum, Natural History Museum and the Victoria and Albert.

In previous years we’ve hit a heatwave which (since the college lecture halls are not air conditioned) has been gruelling, but London was blessedly (comparatively) cool this year.

Accommodation was interesting. We usually stay in the university halls of residence since they are reasonably cheap (for London) and extremely convenient. We’ve been in modern accommodation at Southside in previous years, but this year we were in Beit (pronounced Bite) Hall which is the older building next to the Albert Hall, seen in the background of this photograph. The Beit quad incorporates the student union bar, where we’ve gathered after lectures in previous years. (NOTE – they do good jugs of Pimms perfect for a hot summer evening.) I shared a twin room with T up on the second floor, overlooking the Quad. It was a bit noisy as the evening wore on, but the denizens of the bar quietened down before midnight and mornings were quiet. It was a very handy location for getting to lectures in the Huxley Building. The beds were a bit hard for my taste, and our nearest lift was broken, but I’d be inclined to book there again next year instead of Southside, simply for the convenience

And now to the lectures:

On Wednesday afternoon we had Jess Wade on Materials and Chirality. She should probably have defined chirality before launching into the lecture, instead of waiting until it was halfway through. But we got there in the end. Her field is research into LEDs.

Matt Genge did a fascinating talk on A Fall of Cosmic Dust. He’s a good speaker and the subject matter – what falls to earth – was fascinating, from dust to meteors/meteorites.

On Thursday the first session was Rachael Livermore on Einstein’s Telescope, talking about gravitational lensing effects and the Event Horizon telescope – a worldwide array of telescopes linked together which can photograph galaxies as far away as 55 million light years. 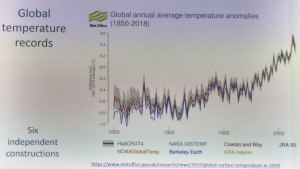 Joanna Haigh gave a great talk on Climate Change, though possibly with far too many graphs to really take in. She gave some useful websites:

Katie Mack entertained and educated us with 4 Ways to End the Universe: Big Crunch/Heat Death/Big Rip/Vacuum Decay, and managed to tailor it to science fiction, which was very useful.

Greg Hunt finished off with Old and New Highlights from Cassini at Saturn, which also included a bit on Enceladus and Titan. In 2022  they will launch JUICE (JUpiter ICy moons Explorer) which will take 7 years to get to Jupiter. Then, launching in 2026 there will be the Dragonfly mission to Titan, arriving 2034. Exciting stuff – if we all live that long!

We had our usual Wednesday evening group dinner at Memories of India on Gloucester Road as in previous years, but hit graduation celebrations. There were four big parties in there, including us, so though the food was excellent, it was too noisy to talk. Pity.

T and I stayed over an extra night to visit the British Museum on Friday, which should be (and possibly will be) a blog post in its own right. Hideously expensive left luggage at Kings Cross. £12.50 per bag, even though mine was little more than a big handbag! The BM is fabulous. I was impressed with the building itself, including the modern Norman Foster designed courtyard. Exhibits that took my fancy included the Sutton Hoo helmet, the room that was King George’s library which now holds the Enlightenment exhibits (as much for the room as the contents) and, of course, the Parthenon Marbles, which they don’t seem to be calling the Elgin Marbles any more. There were loads of school parties, probably because it’s the end of term, but it was still a good visit. Then a meal at King’s Cross, but – massive disappointment – Giraffe no longer does fish finger sandwiches. Though what was Patisserie Valerie is now Costa Coffee – so that was good, at least.

And the trains were on time – both ways. Bonus!