How Much is Too Much History? – A guest post by David Tallerman

Though I’ve gone on to write a couple of things since, my novel To End All Wars, out last week from publisher Aethon, was my first stab at writing historical fiction.  It was a dramatic about-turn for me after years of telling myself that the appeal of genre fiction was that you didn’t have to worry about getting the details right; make up every last element and nobody can grumble that, on page 247, the coin you describe as showing King Leopold the Pedantic wouldn’t be minted for another seventy-three years!  So why make life hard for yourself?  Especially when inventing stuff is half the fun of this writing business.

Only, history has always drawn me, and so have new challenges.  But even if that wasn’t the case, sometimes an idea demands to be written, and sometimes a dream about a man in a World War One officer’s uniform wandering across barren moorlands feels too meaningful to not pursue wherever it leads.  Both of those ingredients were crucial, I felt, the uniform and the fact that this man – who would go on to become my protagonist Rafael Forrester – was wearing that uniform somewhere that obviously wasn’t the trenches of the Western Front.  In other words, the history was baked in from the start, and there was no discarding it, no dressing this tale up in fantastical costume.  If I was going to follow it to its logical conclusion, I’d have to learn a heck of a lot more about the First World War.

And the First World War isn’t a subject you approach lightly.  One of the saddest impressions I took away from four months of research was that of how much has been widely forgotten or misremembered, and of how much horror simply can’t be represented.  Watch every movie made on the topic back to back and you’ll still have experienced the smallest fraction of the suffering that so many endured and that cost so many lives.   It’s hard not to conclude that the war to end all wars ought to have been precisely that, an event so appalling that it guaranteed nobody anywhere would take up arms again.  And that’s quite the weight to assume, especially when what you want to write, ultimately, is at something of a tangent.  The novel that became To End All Wars was always about the terrible conflict that served as its backdrop, but it was about many other things as well.  How could I tell the story I wanted to tell without the reality overwhelming it or making it seem hopelessly trivial?

In retrospect, the solution I came to was an obvious one that any writer tends eventually to learn by heart: I let my characters take the lead.  One of the great difficulties of researching history for the purposes of fiction is that no-one ever thinks they’re living in the past, because obviously from their perspective they’re not.  And in general, human beings don’t focus on the sorts of details that historians fussing over their vanished lives a century later regard as so important.  For the most part, we’re infinitely more concerned with the little things, even when the big things are screaming in our faces.  Sure, there’s a war to be fought, but is that any more important, in the moment, than the question of whether you can get a decent cup of tea?

But the flipside, as a writer, is the freedom that comes with absorbing perspectives that aren’t your own.  That’s also, I guess, a large part of the draw of writing about history in the first place – and, of course, of writing full stop.  Lieutenant Forrester is, in countless ways, not me and not much like me, and the more I grew to understand him, the easier things became.  I didn’t have to encapsulate the horrors of World War One or be true to the ordeals of millions of people, I just had to figure out what Forrester had suffered and seen and the ways in which his experiences had shaped him.  Sure, that remained far from an easy task, but it was a possible one.  And perhaps more importantly, it was infinitely more productive for what the book would end up being than an attempt to honour every last tragedy I’d read about could have been.

As is often the way, ninety percent of that research would eventually be discarded, and what remained would largely feed into a mere four chapters.  The book is, after all, predominantly a work of genre fiction, and beyond a certain point, the genre elements had to be allowed to take the lead.  That rekindled my worries that I might trivialise the real-life events, and the most I can say is that I tried my hardest not to.  To End All Wars ended up being about a bunch of different things, a hotchpotch that drew on everything from The Prisoner to Close Encounters of the Third Kind to The 39 Steps; but more than anything, it’s about the possibility of peace in a world where that prospect seems vanishingly rare.  And in the face of the First World War, and traumas alternately so huge that they boggle the mind and so personal that they’d break the hardest of hearts, it strikes me that perhaps the most useful lesson history has to offer is how never to repeat its mistakes.  It’s not one we’ve come even close to learning, sadly, but for me, the process of writing gave me an opportunity to at least explore that notion. 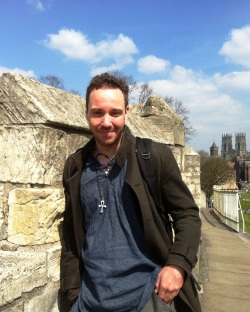 David Tallerman is the author of numerous novels and novellas, most recently the historical science-fiction drama To End All Wars, thriller A Savage Generation and ongoing fantasy series The Black River Chronicles. His comics work includes the graphic novel Endangered Weapon B: Mechanimal Science, with artist Bob Molesworth, and his short fiction has appeared in around a hundred markets, including Clarkesworld, Nightmare, Lightspeed, and Beneath Ceaseless Skies. A number of his best dark fantasy stories were gathered together in his debut collection The Sign in the Moonlight and Other Stories.

He can be found online at davidtallerman.co.uk. 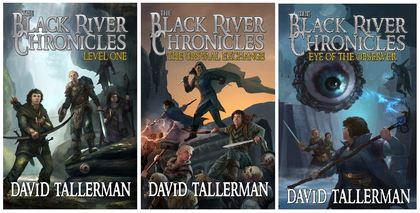