Just after Game of Thrones finished, Iain Grant sent a few of us some revealing questions about Game of Thrones. I know the ending was contentious, but though I would have wished for a happier ending, I wasn’t honestly expecting one. Here are Iain’s questions and my answers.

You’re Cersei. Your city is about to be attacked by a fire breathing dragon and the dragon queen’s army. How would you have successfully defended King’s Landing?

If I’m Cersei, and if I have a modicum of common sense, I won’t even try to defend King’s Landing against a fire breathing dragon AND a superior army. I’ll leave Qyburn in charge and head for the nearest unobtrusive (but comfortable) boat with a bucket of gold, jewels and (hopefully) my best brother. I will skulk in a sheltered cove until all danger of being flamed from above by Drogon has passed. I would, of course, have laid very nasty (explosive) traps as revenge for losing my hold on the Seven Kingdoms. Should Qyburn and the Golden Company prevail I will slip back into the Red Keep again as unobtrusively as I left. I have already stashed a large amount of Lannister gold with the Iron Bank of Bravos against the eventuality of having to cut and run.

If you could have crowned any GoT character apart from Bran, who would you have put on the Iron Throne and why?

Gendry of House Baratheon. Because he knows the common people. He has little experience of ruling and court politics, so he would appoint Tyrion and Davos as joint Hands of the King. Sadly he still won’t get Arya Stark as his lady, but I’m sure that, in time, he’ll find a nice princess from Dorne who will bear him many children. They will be brought up sensibly, educated by Samwell and Brienne, and not spoiled rotten.
You’re the hand of the king. King’s Landing is in ruins. The kingdom is a mess. Winter is here. What would be your key policies and first acts as de facto ruler of the kingdom? 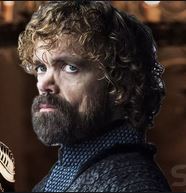 If I’m Tyrion Lannister I’ll put some of my family’s gold to good use. The first job is to feed and shelter the survivors and set up some treatment for the wounded. (Food from High Garden.) All the surviving soldiers would have to bury or burn the bodies before they became a health hazard. I would personally say words for the dead because I need the people to believe that I care, but I won’t let the church gain too much power ever again. Morale is important. After the immediate clean-up I would send most of the foreign soldiers back home, Dothraki, especially as they will only cause trouble if they have nothing much to do. The Unsullied can stay and help the rebuild if they want to, since they don’t really have a home to return to. I will treat the population well because it’s the only way to have them at my back against any outside enemies (rather than circling around behind me with sharpened implements). I will bring in as many maesters as I can prise out of Old Town to heal the hurts that can be healed, because a healthy population is key to rebuilding. I’ll put most of King’s landing’s surviving soldiers to work rebuilding the city. First of all I’ll direct them to build temporary accommodation – shanty-town shelters using timber from Euron Greyjoy’s destroyed fleet and what can be rescued from the rubble. Once the people are not in immediate danger of freezing or starving to death or dying of disease caused by rotting corpses, I’ll put the skilled ones to work (for a fair wage) to rebuild the city walls. I’ll have a well thought out plan for the new city. No more Fleabottoms. The population is smaller, now, so there will be more space. I’ll give them decent houses with fresh water and drains, with roads wide enough to be passable by refuse carts. Maybe I need to clear a quarter of the city at a time and rebuild it properly, from scratch.
You’re the hand of the king. Davos, Samwell, Brienne and Bronn have all quit your small council (sorry). Which GoT characters would you appoint to your small council in what role and why? Do not be afraid to focus on just one.

If Bran is king, then Gendry is available for the small council. He knows the common people and he learns fast. He’s strong, but even tempered and practical. I’d put him in charge of rebuilding the city. Illyrio Mopatis was working with Varys and seemed to have similar aims. He might be worth calling up to be master of coin. Perhaps Podrick would also be a sensible choice. A female council member would be good, but not Yara Greyjoy, she’s too short-tempered. Possibly Gilly, she’s brighter than she seemed at first and she’s got a healthy helping of common sense.
Game of Thrones, Series 8. Was it a triumph or a disappointment? Tell us why.

A triumph, I think (with a few qualifiers). It wasn’t what I might have written, but it’s not my story, and I’ve been following all the seasons avidly. It rounded off a lot of story arcs well. I didn’t like Dany going from good-ish to evil, but it was foreshadowed by the number of people she’d already flamed unnecessarily – the Tarlys and Varys for instance. Jon was the only possible candidate for having to do the dirty deed, but Tyrion also didn’t make the decision lightly. It was a good twist and proved the earlier comment ‘If you think this has a happy ending, you haven’t been paying attention.’ The fact that Dany immediately jumped to the conclusion that it was Jon who’d betrayed her when Tyrion went to tell her about Varys, shows that she would have turned on Jon sooner or later. Sadly, once she flipped, she was as bonkers as her dad.

Jaime and Cersei died in each other’s arms, and despite Cersei being the evil bitch queen, in the end she was simply a woman afraid of death. I’m sorry someone as potentially noble as Jaime wasted himself on someone like Cersei, but he loved her unreservedly, so taking responsibility for her and being with her at the end was entirely in his nature. I think he redeemed himself as much as he ever could have. There were some good deaths. Theon Greyjoy redeemed himself at Winterfell. Jorah Mormont went out the way he would have wanted to, and just at the right time. He would have been horrified and heartbroken if he’d seen Dany turn psycho. (I don’t think he would have been able to stop her if he’d lived.)

The Clegane showdown was very effective, especially since Sandor made Arya see sense at last. (I thought she gave in and changed her mind a bit too quickly, but there’s only so much you can do in six episodes.)

Sansa made a perfectly good Queen in the North. Her arc was completed satisfactorily.

Jon never wanted power. Going north was a good ending for him. Once he gets to grips with what he did to Dany I believe he’ll have a good life. Tormund won’t let him get too introspective.

I don’t think Bran will be a particularly effective ruler. He’s all about the past, not the future. I wish the producers hadn’t made him quite so wishy-washy. Yes, he came out with a few good lines such as ‘You’re exactly where you’re supposed to be.’ But too much mystical bollox is not going to work well for the survivors of King’s Landing and the Six Kingdoms. It needs someone practical – which is, I guess, where Tyrion comes in. He is now de facto ruler of the Six Kingdoms – which Bran would say, is exactly what he’s supposed to be. And he’s the right person for the job. I adore Tyrion. 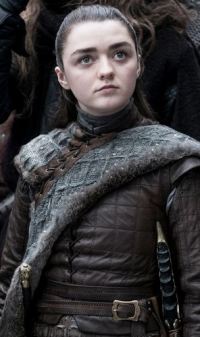 There were some personal happy endings. Bronn got his castle. Gendry was legitimised and made Lord of Storm’s End. Brienne became a knight, and though she lost him again, she did almost get her happy ending with Jaime. Podrick survived and got his knighthood. Davos and Tyrion came out on top. Sam became a maester and a father and is absolutely the nicest character in the whole series.

And now I want to see Jon become King Beyond the Wall, because he still has a lot of unfulfilled potential, and he’s learned such a lot and can do so much good. And I want to see the spinoff series, ‘The Further Adventures of Arya Stark’.

I’m also looking forward to reading the next book, The Winds of Winter, whenever George finishes it. There’s one more book to come after that, I believe. It must be doubly difficult to write the end of the series because we’ve all seen it on telly, but there’s no reason the TV series and the books have to have the same ending. There are lots of places where the book and TV versions differ.

Jacey Bedford maintains this blog. She is a writer of science fiction and fantasy (www.jaceybedford.co.uk), the secretary of Milford SF Writers (www.milfordSF.co.uk), a singer (www.artisan-harmony.com) and a music agent booking UK tours and concerts for folk performers (www.jacey-bedford.com).
View all posts by Jacey Bedford →
This entry was posted in fantasy, reading, writing and tagged characterisation, Game of Thrones, television, writing. Bookmark the permalink.

1 Response to Game of Thrones Revisited