Posted on September 8, 2020 by Jacey Bedford

I write science fiction. I’m pretty sure my sub-genre is space opera. I’m happy with that definition.

I grew up reading my dad’s Lensman books and the distinctive Gollancz yellow jacketed SF, however I wasn’t aware of any distinction between SF and space opera, so I thought I’d look it up.

Apparently the term, Space Opera, was coined back in 1941 as a pejorative in a fanzine article by Wilson Tucker. He defined it as ‘a hacky, grinding, stinking, outworn spaceship yarn’. The term was a play on ‘soap opera’ and ‘horse opera’. Indeed some critics likened space opera to cowboy stories set in space – a concept that began with EE Doc Smith’s Skylark books, which were first published in the 1930s, and came full circle in 2002 with Joss Whedon’s much-missed TV series, Firefly.

By the 1960s the term was regarded as less pejorative, and in 1975 the anthology ‘Space Opera’ edited by Brian Aldiss redefined it. Space opera became ‘the good old stuff.’ The Del-Reys  challenged the term yet again, completely rejuvenating it when Del Rey books reissued titles as unashamed space opera.

Following on from Star Trek came the huge popularity of Star Wars and the transformation was complete. Space opera was no longer outmoded and hackish, but was (and still is) riding the crest of a wave in popular culture. By the early 1980s not only the cognoscenti, but the wider public owned the term, and by 1990 it became a legitimate subgenre of science fiction, no longer scorned. Amazon lists over 10,000 books in the Space Opera category featuring authors such as John Scalzi, Lois McMaster Bujold, Robert A Heinlein, David Brin, EE Doc Smith, James A Corey, Frank Herbert, Stephen Baxter, Iain M. Banks, Peter F Hamilton, Alastair Reynolds, and Arthur C Clarke.

So what is space opera? The accepted definition is an adventure story set (mostly) in outer space, but with the added expectation that it will be large in scope, plot and action, colourful and dramatic. Characters will be heroic and sympathetic and romance might be involved. It isn’t always hard science fiction in that it doesn’t always acknowledge the laws of physics and the nature of space as we understand it (though it can do). The galaxy – or even the universe – is no longer constrained by physics. Faster than light travel and wormholes abound and space battles are often in evidence, so much so that military SF has become a popular sub-genre of space opera.

I’m still finding my way around this fascinating genre. I think my Psi-Tech trilogy falls broadly into this category, though your take may differ. What makes it space opera? Sympathetic characters, space ships, galaxy-spanning adventure, gates through the void (not quite wormholes), space stations, space battles, peril, and a touch of romance. Sounds like space opera to me. 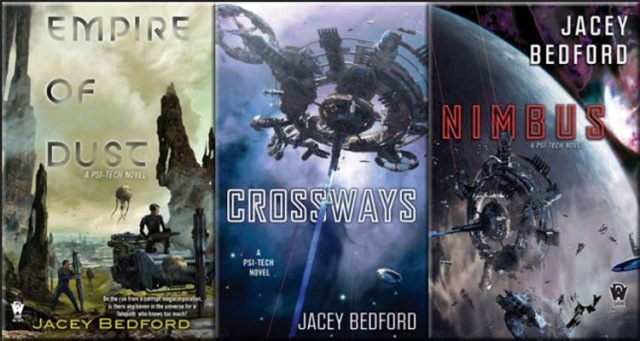