What I learned about Tallinn that I couldn’t have found out from a guidebook.

I was supposed to be going to the World Science Fiction Convention in New Zealand this year, a country I’ve never been to, even though I visited Ausralia in 2000. Australia and NZ look conveniently close when viewed on a world map, but believe me, they aren’t. I’d done my research, checked out trains for travelling from Auckland to Wellington, sussed out potential visits to Hobbiton, the Weta Workshop and geothermal and cultural sites. I found out lots of things I didn’t know, but it’s not a substitute for being there.

So this is my trip to Tallinn in 2017, which was a research trip tagged on to another Worldcon trip. This blog was first posted on August 21, 2017

Following my trip to the World Science Fiction Convention in Helsinki, I took a side trip to Tallinn to do some research for my novel-in-progress ‘The Amber Crown’ set in an analogue of the Baltic States in a time period roughly equivalent to the mid 1600s. It’s only a couple of hours by ferry from Finland to Estonia.

It’s the first time I’ve had the opportunity to do an actual research trip, and I’m so glad I did because there were things which I couldn’t possibly have learned from a guidebook. Getting a general feel for the place was just the start of it.

So what did I learn by being there?

Cobbles are very difficult to walk on. Most of the streets I think of as cobbled in England are actually paved with flattish stone sets (as are some of the Tallinn Streets) but Estonian cobbles are round-topped, uneven in size and shape, and really easy to trip and slip on. Street chases will have to be re-thought.

We took a horse-drawn trip round the Old Town in a landau-type of carriage drawn by a single (gorgeous) Friesian horse. The horse didn’t seem to have problems with either the cobbles or the stone sets, but the carriage was a bumpy ride despite the springing – and that was at a sedate walk. In an older type of unsprung vehicle any pace faster than a walk would be likely to shake your teeth out of your head.

I knew Tallinn (or Reval as it was called way-back-when) was one of the northern outposts of the Hanseatic League, that confederation of merchant guilds and their market towns which dominated Northern Europe and the Baltic maritime trade for three centuries from the Gulf of Finland through the Skagerrack and the Kattegat to the North Sea. I hadn’t realised, however, how enormous the Hansa influence was.

The medieval buildings are very different from English Medieval architecture, and houses are not unlike the frontages in Bruges, Ghent and Brussels in terms of the colour-washed walls, the steep gables (houses often gable-end on to the road) and the multiple rows of tiny attic windows set into red tiled roofs. Could this commonality be to do with ideas spread via the Hanseatic League?

The architectural style is labelled ‘Gothic’. Since I always associated Gothic architecture with the great sweeping cathedrals such as York Minster, all pointy windows and flying buttresses, I’m not sure Gothic in this context means what I think it means.

6 Kuninga Street. The frontage is to the left of the plan. Keldrikorrus mean basement in Estonian.

This is a blurry shot (no flash photography or tripods allowed) of a fireplace in the Tallinn City Museum with a strange lowered ceiling supported by a masonry pillar. This wasn’t a one-off, similar constructions appear all over the town.

I looked up Tallinn’s architecture on the web and found (on visittallinn.ee) which seems to back up my ideas about the Hanseatic League:

In the 15th century (Late Gothic era), a town hall, guild building, convent buildings and residential houses were built in the town. These are characterised by the high dormers on the high-stretched facades. Of the different layouts, the prevalent type of house was that with two rooms, a diele and a dornse. A diele is a spacious room that extends to the height of two storeys with a fireplace at the back wall; this type of building was primarily used as an office or workshop. And behind it was the dornse – a living room with hot-air heating. The upstairs, cellars and attics were used as storage rooms.

Tallinn’s town plan is largely unaltered from the 13th and 14th centuries, with narrow streets and even narrower alleyways. Unlike Medieval York where streets such as The Shambles are tunnel-like because of the cantilevered upper floors hanging over the road, the houses of Tallinn are straight up, and then up some more, with narrow houses rising three or four storeys and then two further levels of windows in the steep pitch of the red-tiled roofs. There are plenty of houses which might have been merchants’ houses because they have a crane over a tall doorway on the upper floors and – according to a model in the city museum – the upper floors in the roof-space were often used as storage. Though it would seem logical to store heavy goods on, or close to, ground level, I guess that using the attics for storage was also good for security.

Almost every entrance to a medieval building was either up or down steps – sometimes just one or two, sometimes seven or eight. Of course, street levels may have changed. (They’re not likely to be the same stone sets and cobbles from the 1600s or earlier, though to be fair the medieval doorways did not appear to be compromised by a significant change in street level.) The ‘ground’ floors of many shops (such as the old apothecary’s shop still running as a pharmacy is half a flight of steps up (with, no doubt, a cellar below). The Town Hall entrance is down half a flight of steps, so the lowest level (a vaulted space, probably once a cellar) is half above/half below street level. The old steps to the next upper level are massively steep and narrow, and there’s a similar set of steps to the ‘posh’ bit, i.e. the council chamber and court room. (Luckily there’s a newer stair that we discovered after climbing the first flight and that meant we didn’t have to brave the second flight and could exit via the easier steps.) 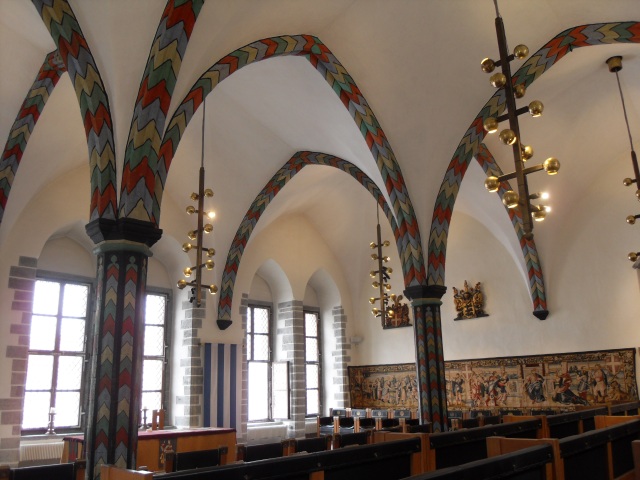 I am always humbled when I travel abroad that English is spoken in so many countries, at least in the main tourist centres. In today’s Tallinn I heard Russian, French, German, Japanese and a number of Nordic languages which my ear couldn’t differentiate from Estonian – Finnish and Swedish, I expect. But most people had a smattering of English and many people spoke it well and almost unaccented. And so it must have been when Tallinn was a great trading port. I doubt that English was common, but to trade with Germany, Sweden and Russia, there must have been a core of multi-lingual people, at least in the port area and the trading heart of the city.

In addition to all the things I gleaned that are useful for my book, I also discovered that Tallinn is just as beautiful as its reputation says and that I want to go back there some day.

Tip for first time Tallinn tourists. Avoid the bicycle taxis from the ferry port to the city. They’ll charge you twice as much as they originally quoted by saying the price is per person, and lie about being able to take you into the Old Town itself, leaving you to lug heavy cases from the Viru Gate to your hotel. (Luckily that was only a short walk for us.) So the last thing I learned from Tallinn is that there’s always someone willing to take advantage of a stranger. A good lesson.

Jacey Bedford maintains this blog. She is a writer of science fiction and fantasy (www.jaceybedford.co.uk), the secretary of Milford SF Writers (www.milfordSF.co.uk), a singer (www.artisan-harmony.com) and a music agent booking UK tours and concerts for folk performers (www.jacey-bedford.com).
View all posts by Jacey Bedford →
This entry was posted in fantasy, historical fiction, reading, writing and tagged Amber Crown, estonia, Finland, research, tallinn, travel. Bookmark the permalink.

2 Responses to What I learned about Tallinn that I couldn’t have found out from a guidebook.